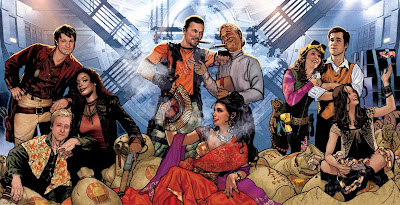 The story is set between the Firefly series and the film, and was intended to bridge the two and lead into the movie.  It is used to set up the beginning of the film by depicting Inara's departure and Book's intention to leave the ship, introduces several characters important to Serenity’s storyline, including The Operative and Mingo and Fanty, and resolves the Hands of Blue plotline. The comic also re-introduces Lawrence Dobson, an Alliance agent who was (apparently) killed by Mal in the Firefly pilot episode. Whedon had always planned to bring back Dobson, but did not have the opportunity before the series was cancelled.

The mini-series is set between the series and the film. However, Better Days is set before the events of Those Left Behind, in order to have all the characters aboard the ship, and to better capture the "heart and status quo -- in as much as there even is one -- of the [television] series". The comic sees the crew of Serenity pulling off a successful job, which results in unexpected wealth and the related complications. 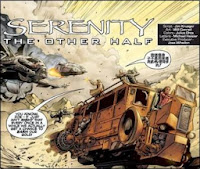 The story revolves around the Serenity crew aboard a hover-stagecoach, protecting it from Reavers as they try to deliver their seriously wounded passenger to their destination, in order to claim the second half of his fare.

Following Wash's death, three former colleagues pool their resources to purchase a ship (a Firefly-class ship of a different model to Serenity), which they intend to name Jetwash in honor of their friend. At the floating out ceremony, they are initially unable to find the right words to christen the ship with, and instead tell each other stories about their interactions with the pilot.

Described by writer Zack Whedon as a "slice-of-life, day-on-the-ship story," the comic depicts the crew of Serenity stranded on an icy planet.

Serenity: Leaves on the Wind

A six-issue series by Dark Horse Comics will begin in January 2014. Titled Serenity: Leaves on the Wind, it will take place after the events of the film. It will be written by Zack Whedon, with art by Georges Jeanty. The series will be the first major story set after the film, and the third overall, preceded by one-shots Float Out and It's Never Easy.


Malcolm Reynolds’s crew shook the ’verse to its core when they laid bare the crimes against humanity undertaken by their sinister government—the Alliance. Always outlaws, Mal, a very pregnant Zoe, new pilot River Tam, and the other surviving crew members are in greater danger than ever. Meanwhile, everyone is asking the same question . .

Serenity: Leaves on the Wind #2

Forced out of hiding, Serenity’s crew gets separated, and it becomes clear that everyone looking for the outlaws is on the verge of finding them. River offers to uncover the secrets that are hidden within her in the hope that the crew might have something to bargain with. 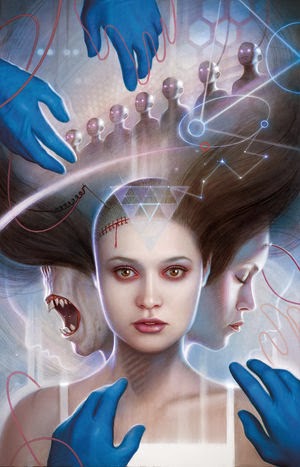 Serenity is found! The crew, including Jayne and a certain bounty hunter, get themselves ready to restock and retrieve when River wakes from her self-induced sleep and gives Mal a mandate . . . which will eventually—hopefully—maybe—lead to Zoe’s rescue!

on 3/02/2011
Email ThisBlogThis!Share to TwitterShare to FacebookShare to Pinterest