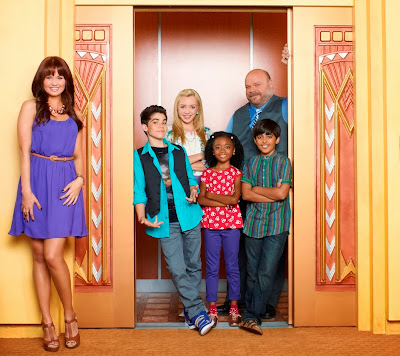 Jessie is an American television sitcom which premiered on September 30, 2011 on the Disney Channel.


The series follows Jessie O'Keefe, an 18-year-old small town girl with big dreams who, rebelling against her strict father, a Marine Sergeant, decides to leave the military base in Texas where she grew up and moves to New York City. She accepts a job as a nanny and moves into a multi-million dollar penthouse apartment on the Upper East Side with the wealthy Ross family which includes jet-setting parents, Morgan and Christina, and their four rambunctious children; Emma, Luke, Ravi and Zuri, along with the family's pet, a seven-foot monitor lizard. With a whole new world of experiences open to her, Jessie embarks on new adventures in the big city as she grows to rely on the love and support of the children in her care. Assisting her are Bertram, the family’s sarcastic butler, and Tony, the building's 20-year-old doorman


Jessie influences Emma to ask the new girl who moves into the building to her party.


Jessie hooks Zuri up with a new girl named Wendy McMillan after seeing a director to get her acting career started. With Jessie she's an angel, but while Bertram is in charge, she tears up the place and wrecks everything. Bertram tries to take care of it, but Wendy hooks Bertram up too. Zuri tells Jessie she's a monster and wants to stop playing with her. Meanwhile, Emma goes over her limit on her cell phone bill, so Jessie forces her to get a job so she can pay the bill herself.

on 10/22/2011
Email ThisBlogThis!Share to TwitterShare to FacebookShare to Pinterest