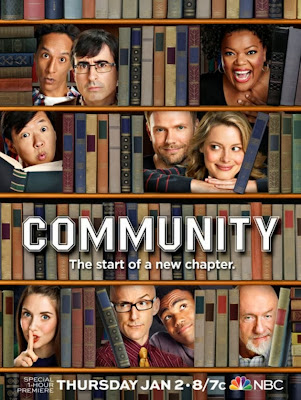 Community is an American comedy series, created by Dan Harmon, currently airing on NBC. The series premiered on September 17, 2009, and currently airs in the 8:00 pm ET time slot.
In May 2013, NBC renewed the series for a fifth season of 13 episodes, with Harmon returning as showrunner after a season-long absence. The fifth season will debut on January 2, 2014, with a one-hour premiere.


The show revolves around the on-campus exploits of seven students who are connected through their Spanish study group at Greendale Community College. A smarmy lawyer whose education is deemed void by the bar is forced to attend a local community college with an extremely eclectic staff and student body. The series also features several recurring characters who are students and teachers at Greendale.


RG's Views
This has been one of my favorite sitcoms of the past few years. This season they are going a little overboard with the theme episodes in my opinion. I want to get back to the storylines and move things forward. It's still a very funny show and I love the characters. But it needs to go somewhere. Hopefully the return of Dan Harmon will bring it back to it's former glory.


Jeff helps Duncan score a date with Britta, and Abed has a Hickey encounter on his way to the movie theater.


Dean Pelton invites two designers to Greendale to beta test their new social networking Application. What starts as a fun social interaction of ranking classmates turns into an all-out class war as Greendale students compete for the highest score. Jeff and Shirley battle for supremacy, while Britta rails against the very concept. Meanwhile, Professor Hickey goes underground - literally - until the whole thing blows over.


on 2/05/2010
Email ThisBlogThis!Share to TwitterShare to FacebookShare to Pinterest