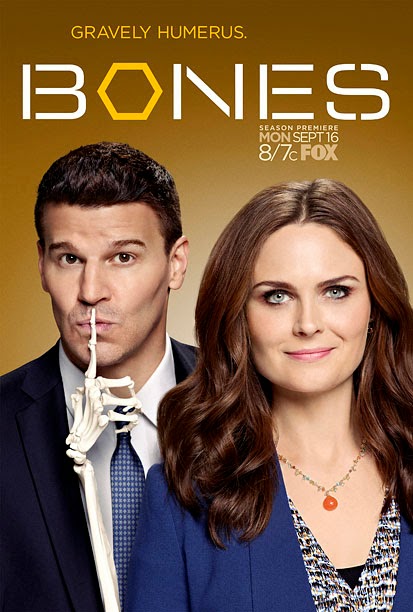 Bones is an American crime drama television series that premiered on the Fox Network on September 13, 2005. Created by Hart Hanson, the series is very loosely based on the life of forensic anthropologist Kathy Reichs, who also produces the show. Its title character, Temperance Brennan, is named after the protagonist of Reichs' crime novel series. The series is currently airing its ninth season which premiered on September 16, 2013, and has been renewed for a tenth season.


The show tells the story of a series of case files, solved weekly, by the unlikely alliance of Temperance "Bones" Brennan's forensic anthropology team at the Jeffersonian Institute (a thinly veiled allusion to the Smithsonian Institution) and FBI Special Agent Seeley Booth. By examining the human remains of the murder victims, Dr. Brennan and her team provide scientific expertise and an outsider's perspective to the world of criminal investigation to the FBI. In addition to the murder cases featured in each episode, the series explores the backgrounds and relationships of the major characters including the developing friendship and possibly romantic relationship between Brennan and Booth. The series has dark comedic undertones.

But the show itself has great storylines that you can enjoy from week to week even if you missed some eps along the way. Though why you would do that I don't know.


The Jeffersonian team investigates the murder of Lauren Frank, a kidnap victim whose remains were found buried at a park. But when they discover the unhappy relationship that Lauren had with her stepmother, the team starts to think the killer was someone closer to the girl than expected. Meanwhile, Hodgins uncovers a shocking secret about his family and Brennan and Booth face a common couples dilemma -- whether to co-mingle their funds


When a CIA informant is found murdered, Booth and CIA Agent Danny Beck (guest star Freddie Prinze Jr.) must work together to track down an Afghani terrorist. Meanwhile, Brennan wants to work more closely with Booth in the field, and the duo must confront the implications of what that means to their family in the all-new The Source in the Sludge episode of BONES airing Monday, March 10th on FOX.


on 9/23/2010
Email ThisBlogThis!Share to TwitterShare to FacebookShare to Pinterest