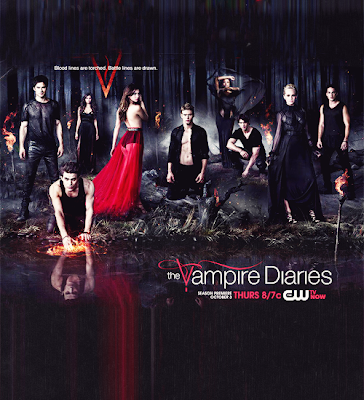 The Vampire Diaries is an American supernatural-fantasy horror television series developed by Kevin Williamson, based on the book series of the same name by L. J. Smith. The series premiered on September 10, 2009, on The CW Television Network, and has become its best performing show.
On February 13, 2014, The CW renewed the series for a sixth season.


The series follows the life of Elena Gilbert (Nina Dobrev), who falls in love with vampire brothers Stefan (Paul Wesley) and Damon Salvatore (Ian Somerhalder). The series also focuses on the lives of Elena's friends and other inhabitants of the fictional town of Mystic Falls, Virginia. The series is a mix of teen drama and the supernatural.

Make sure you also check out the spin off "The Originals"


GOOD NEWS, BAD NEWS — As Damon’s behavior escalates from destructive to deadly, Stefan begins to regret their last conversation and decides to track Damon down and intervene. For reasons of her own, Elena volunteers to come along. Dr. Wes (guest star Rick Cosnett) enlists the Travelers to set a trap that will once again test Damon’s friendship with Enzo (guest star Michael Malarkey). After a heart-to-heart talk with Nadia (guest star Olga Fonda), Matt enlists Caroline and Tyler’s help to protect Elena, leading to a violent confrontation. Later, when Stefan tries to comfort a dejected Caroline, their conversation leads to a horrifying realization.

While Nadia remembers her centuries-long search for her mother, Stefan, Caroline and Matt come up with a desperate new plan to save Elena's life. For the second time, Bonnie and Jeremy must turn to Liv for help. Damon baits Tyler into a nasty confrontation, then takes off to seek revenge on Dr. Wes. Caroline and Tyler come to a new understanding. Finally, Bonnie learns of a terrifying secret that will threaten the lives of all her friends.

on 2/07/2010
Email ThisBlogThis!Share to TwitterShare to FacebookShare to Pinterest