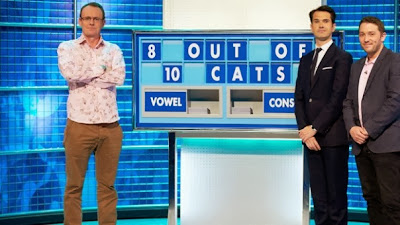 8 Out of 10 Cats is a British television comedy panel game produced by Zeppotron (a subsidiary of Endemol UK) for Channel 4. It was first broadcast on 3 June 2005. The show's title is derived from a well-known advertising tagline for Whiskas cat food, which originally claimed that "8 out of 10 cats prefer Whiskas"


The show is hosted by comedian Jimmy Carr and features two teams, consisting of a regular team captain and two celebrity guests each. Sean Lock has appeared as the first team captain since the show's inception; the opposing captain was originally Dave Spikey, who left after series 4 to pursue other projects and was replaced by Jason Manford. Manford departed following series 10, and was replaced by Jon Richardson for series 11.
Every week, the captains are joined by two celebrities from the likes of David Walliams and Alan Carr. Often, topical celebrities appear on the show, for example Ruth Badger following her appearance on The Apprentice

I'm a fan of stand up. And Britain does a lot of these panel shows with a variety of very funny comedians. The show has absolutely no point except to make you laugh. And I find it succeeds quite well. Always a bright spot.

Note that right now, they are airing countdown specials on Thursdays, and the regular panel shows on Mondays.

on 12/31/2013
Email ThisBlogThis!Share to TwitterShare to FacebookShare to Pinterest