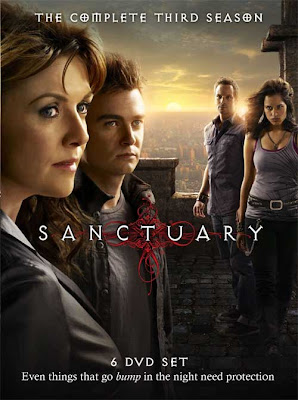 Sanctuary is a Canadian science fiction-fantasy television series, created by Damian Kindler. The show is an expansion of an eight-webisode series that was released at no cost through the Internet in early 2007. Seeing the success of the web series, Syfy decided to pick up the series for a more traditional television-based 13-episode season. The series premiered on October 3, 2008, in both Canada and the United States, and on October 6, in the United Kingdom. On May 21, 2012, Syfy announced that Sanctuary will not be returning for a fifth season and that the show has been cancelled.


The series is set in the fictional city of Old City and follows 157-year-old scientist, Helen Magnus, and her team: daughter Ashley, protege Will Zimmerman, Henry Foss, and an aptly named "Bigfoot". The Sanctuary team assumes the mission of tracking "Abnormals", (specially gifted humans and creatures) and bringing them to the Sanctuary for the dual purpose of protecting the public as well as the Abnormals themselves.