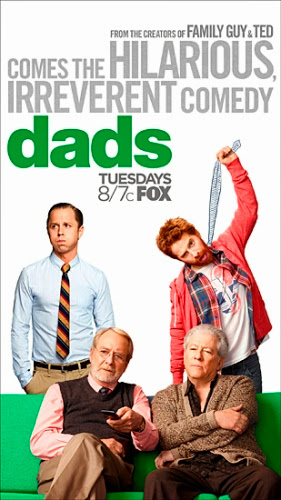 Dads is an American sitcom which premiered on September 17, 2013 and airs Tuesdays at 8:00/7:00c on Fox. The series was created by Alec Sulkin and Wellesley Wild. The show is recorded in front of a live studio audience


A multi-camera comedy about two successful guys in their 30s who have their lives turned upside down when their nightmare dads unexpectedly move in with them.


Theme Song:
Daddy Took Me To the Zoo (Theme From Dads) - The Bogmen

I think this show is very funny. It has gotten really bad reviews and lots of bad hype for being politically incorrect.  But the cast is so talented. I don't know how anyone can take the offense to the ridiculousness of the racial humor. It feels like a deliberate raspberry is being blown when I watch it. I doubt it will survive to a second season but I will enjoy it while it lasts.


1x17
Camilla insists that the Whittemores quit drinking after Crawford gets too drunk and accidentally ruins the couch.

1x18
When Eli starts ignoring David's constant complaining, one of them ends up in the hospital.

on 12/29/2013
Email ThisBlogThis!Share to TwitterShare to FacebookShare to Pinterest