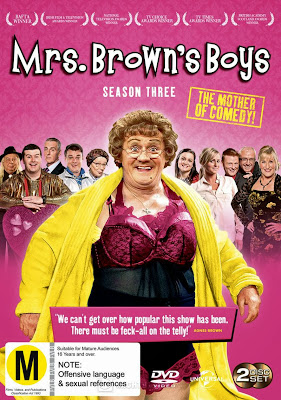 Mrs Brown's Boys is a British-Irish award-winning sitcom created by and starring writer and performer Brendan O'Carroll. The show is based on O'Carroll's stage plays about the character Agnes Browne, which were developed from books and straight-to-DVD films. The sitcom continues the stories of Agnes, now with the shortened surname "Brown", and her family who are played by real-life close friends and family of O'Carroll's. After being slated by critics, the show has become a ratings success in both Ireland, where it is set, and the United Kingdom, where it is recorded. On 29 December 2012 the show began its third series. Mrs. Brown's Boys is a co-production among BBC Scotland, BocPix and RTÉ.
Show creator Brendan O'Carroll, alongside the BBC, have confirmed that Mrs Brown's Boys will return for a fourth series in 2014. It was later announced that this series would not be expected to air until late 2014.

Agnes Brown - a widow living in Ireland - runs her home with an iron fist as she manages her sons, daughter Kathy and best friend Winnie. Add elderly Grandad, various in-laws and grandchildren to the mix and Mrs Brown usually has her hands full.
Funny, outspoken and never at a loss for words (especially profanity), she gets through life and the daily grind with a caustic remark and a loving wink.

What makes the show different is that the "fourth wall" is broken. This could mean anything from Agnes interacting with the crew filming the show, allowing technical goofs and glitches to make their way into the story line or having the studio audience join in for an impromptu musical number.

One of the best "laugh out loud" shows on today. They break character, they show their flubs, they have fun and it shows. My only gripe is that we have to wait so gosh darn long between series.

The lead-up to New Year starts with some sad news as Maria discovers she has lost her Auntie Mary in a car accident. As if that wasn't bad enough, Father Damien and grumpy new parish priest Father McBride announce that Mary's pet parrot will need to be put down unless someone offers to take it in. Luckily, Agnes has her New Year's party planning to take her mind off things - if only people would stop turning down her invitations. Meanwhile, Mark and Betty have decided that Bono is going to attend the infamous local school, St Stephen's. Convinced that it will be too rough for her beloved grandson, Agnes does everything in her power to convince the couple to change finally Dermot and Buster dress up as Laurel and Hardy


on 12/29/2013
Email ThisBlogThis!Share to TwitterShare to FacebookShare to Pinterest