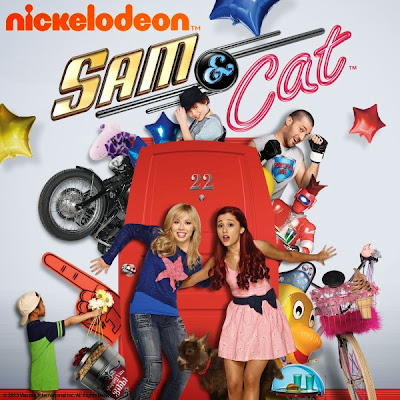 Sam & Cat is an American teen sitcom that premiered June 8, 2013, on Nickelodeon. It is a crossover spin-off/sequel of both iCarly and Victorious. It stars Jennette McCurdy as Sam Puckett (from iCarly) and Ariana Grande as Cat Valentine (from Victorious).


Sam Puckett (Jennette McCurdy) has been touring the West Coast by motorcycle, and stops in Los Angeles. She witnesses Cat Valentine (Ariana Grande) being thrown into the back of a garbage truck, and rescues her. They become friends, and Cat convinces her to become roommates after Cat's grandmother moves to a retirement home. To make money, rather than getting traditional after-school jobs, they form an after-school babysitting business that leads them into a series of comical adventures. Also involved in their lives are Dice (Cameron Ocasio), their next door neighbor, who is notorious for aiding people for money, Cat's cheerful and supportive grandmother, Nona (Maree Cheatham), who decided to move into "Elderly Acres", which is a home for the aged, and Goomer (Zoran Korach), a dim-witted professional MMA fighter whom Dice manages.


Another Teen Comedy that fits the formula that most of these shows have. So of course I love it. These two play well off each other. Hoping for some visits from their past shows.


Jennette McCurdy, Ariana Grande, Cameron Ocasio, Maree Cheatham and Zoran Korach are on a lunch break from filming "Sam & Cat“, while the cast is interrupted by fans of the show. The episode includes blooper clips, dancing clips, outtake clips, prop problem clips, exciting clips, yawning montage clips and even some Drake & Josh bloopers.
Note: Michael Eric Reid Guest stars in this episode. Jerry Trainor appears in a blooper. Ariana Grande appears with her natural brown hair in this episode. Ariana confirmed that she has been wearing a wig for Cat's hair and did not dye her hair red like she did on Victorious.

on 12/20/2013
Email ThisBlogThis!Share to TwitterShare to FacebookShare to Pinterest