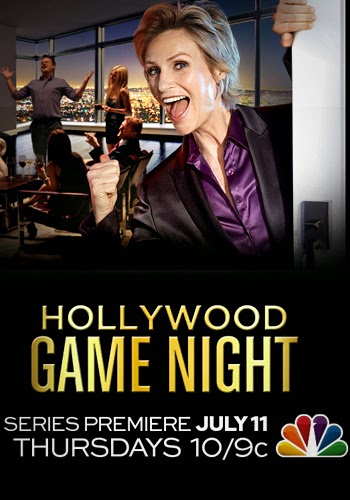 Hollywood Game Night is an American television series currently airing on NBC. It premiered on July 11, 2013. The series follows two contestants who take part in a casual game night with celebrities. One of the two contestants takes home up to $25,000 in cash prizes. It is hosted by Jane Lynch. A holiday special aired on December 23, 2013, and the rest of season 2 is scheduled to begin on January 20, 2014.


Two teams of four players each (consisting of three celebrities and one contestant) play a series of games all while driving each other crazy. The celebrities play for a chance to win $10,000 for a charity of their choice, while civilian players compete for the right to win $25,000. The civilian player is designated captain of the team.

I've always been a fan of celebrity game shows. It's been a long time since we've gotten one like this. And depending on the guests, it usually delivers a smile. Jane Lynch is not my favorite host as i feel she takes it over the top a bit. But otherwise I quite enjoy the show.


on 1/08/2014
Email ThisBlogThis!Share to TwitterShare to FacebookShare to Pinterest