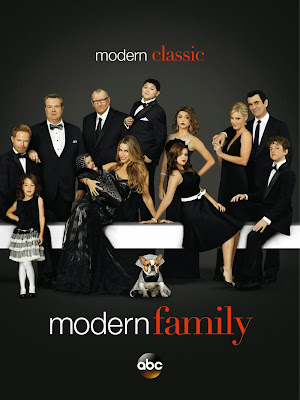 Modern Family is an American mockumentary comedy TV series.  The show premiered on ABC on September 23, 2009 to critical acclaim. The half-hour series, which was created by Christopher Lloyd and Steven Levitan, is produced by Fox Television Studios.


The mockumentary follows the families of Jay Pritchett (Ed O'Neill), his daughter Claire Dunphy (Julie Bowen), and his son Mitchell Pritchett (Jesse Tyler Ferguson). While Claire is a homemaker mom in a traditional family, Jay is married to a much younger woman; Gloria (Sofía Vergara) and raising a pre-teen stepson, and Mitchell and his partner have adopted a Vietnamese baby.


RG's Views
This is a great funny cast that brings new meaning to family comedy. The Mockumentary style of filming takes a bit of time to get used to but it's really just a great look at what the characters are thinking.


Claire and Phil decide to spy on Luke and Manny as they're hanging out with one of their more questionable friends. Meanwhile, Gloria is furious with Jay because she thinks he had a dream about another woman, but Jay misinterprets her anger for another offense he committed. And, Cam secretly uses Mitch as a scapegoat to get out of attending a party, while Haley tries to keep her photography exhibit a secret from her family.


Cameron is in charge of the school's big spring dance, but when a popular teacher returns from sabbatical, a bit of not-so-friendly competition blooms. And with Claire on chaperone duty at the dance, Phil gets Haley to accompany him to his annual realtor's banquet and is looking forward to impressing his little girl. Elsewhere, Mitch starts a new job and can't seem to get a good read on the new boss or the work environment. Jay and Gloria babysit Lily and an accident with Gloria's purse ignites a case of whodunit and it's Lily's word against baby Joe's.

on 2/05/2010
Email ThisBlogThis!Share to TwitterShare to FacebookShare to Pinterest