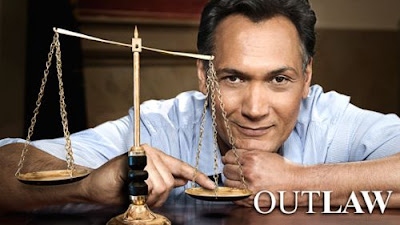 Outlaw is an upcoming American television series produced by Conan O'Brien for the NBC network. The series will premiere on Wednesday, September 15, 2010, and then air in its regular timeslot on Fridays beginning September 17.


Cyrus Garza (Smits) is a Supreme Court justice who abruptly quits the high-level position. A playboy and a gambler, Garza had always adhered to a strict interpretation of the law until he realized the system he believed in was flawed. Now that he's quit the bench and returned to private practice, he's determined to represent "the little guy" and use his inside knowledge of the justice system to take on today's biggest legal cases. And he's making plenty of powerful people unhappy along the way.


Show goes down to often (links available on request)

on 9/15/2010
Email ThisBlogThis!Share to TwitterShare to FacebookShare to Pinterest