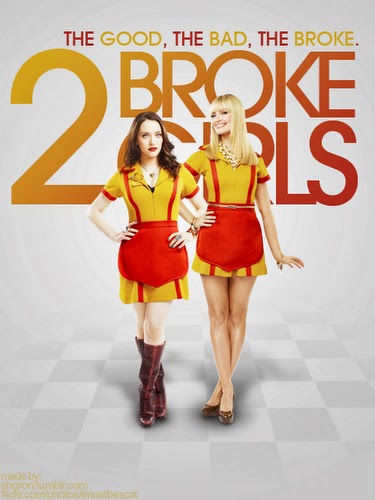 2 Broke Girls is an American television comedy series that debuted on CBS during the 2011–12 television season. The first episode aired at 9:30 pm (E/P)  on September 19, 2011. The series was created by Michael Patrick King and Whitney Cummings for Warner Bros. Television.


Set in New York City, the series chronicles the lives of two waitresses in their twenties—Max (Kat Dennings), who comes from a poor working-class family, and Caroline (Beth Behrs), who was born rich but is now down on her luck—working together at a Brooklyn restaurant. The two become fast friends and build their dream of one day opening a cupcake shop (for which they need to raise $250,000), although they can barely afford anything with the pay they receive at work, and must continually find ways to make ends meet. Among those working with them at the restaurant are their boss, Han Lee (Matthew Moy); Oleg (Jonathan Kite), an upbeat Russian cook; and Earl (Garrett Morris), the cashier. At the end of each episode, a tally shows how much of the $250,000 goal they have earned so far.


RG's Views:
I love this show. The cupcake concept is a little tired. But I love the character interaction, and that the relationship between these two unlikely friends is given center stage. Loving the addition of Max's new boyfriend Deke. Hope he sticks around awhile.

Caroline tries to fit in with Max and the diner gang as they go out to get wild and crazy at the St. Patrick's Day parade, but finds herself longing to practice her former holiday traditions at the Plaza Hotel

on 9/21/2011
Email ThisBlogThis!Share to TwitterShare to FacebookShare to Pinterest