Angel: After The Fall 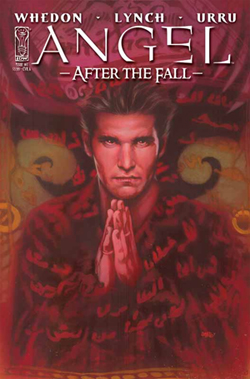 Angel: After the Fall is a comic book published by IDW Publishing. Written by Brian Lynch and plotted with Joss Whedon, the series is a canonical continuation of the Angel television series, and follows the events of that show's final televised season. The first issue was released on November 21, 2007.
Angel was an comic book series from IDW Publishing. The title began as a limited series subtitled After the Fall. This storyline lasted for seventeen issues, after which IDW chose to continue the series as an ongoing with new writers. While After the Fall was plotted by Joss Whedon and considered canon, the canonical status of subsequent issues is more ambiguous.

Angel: After the Fall sees the heroic vampire, Angel, coping with the apocalyptic aftermath of the television series after he took over and subsequently betrayed the demonic law firm, Wolfram & Hart. The city of Los Angeles has since been sent to hell  by Wolfram & Hart as a result of Angel's actions. The series follows his attempts to rescue the people he has sworn to protect.


on 8/21/2010
Email ThisBlogThis!Share to TwitterShare to FacebookShare to Pinterest

Labels: Angel, Angel: After The Fall

The Originals
The Jeffersons