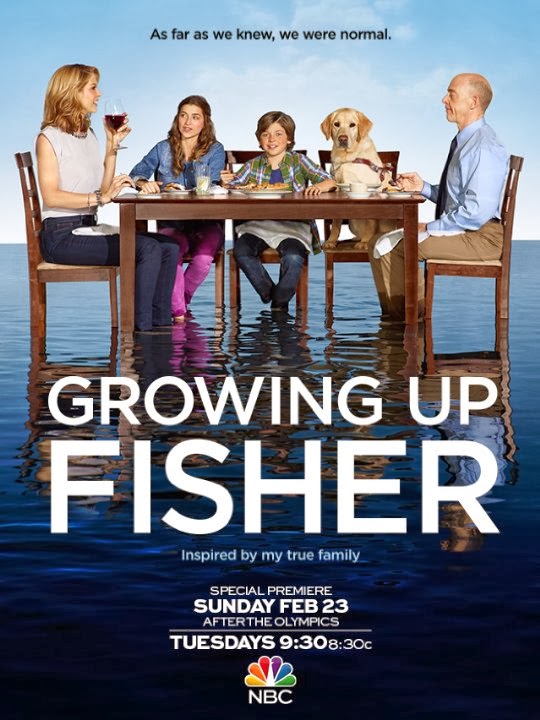 Growing Up Fisher is an upcoming American television series that is expected to air midseason on NBC as part of the 2013–14 schedule. The semi-autobiographical single-camera comedy was created by DJ Nash. It will premiere following the 2014 Olympics on Sunday, February 23, 2014, at 10:30 pm. It will then premiere on its regular timeslot on Tuesday, February 25, 2014, at 9:30 pm.


It's not every family that's brought closer together by divorce... but then again, the Fishers aren't exactly typical. Take Mel Fisher, for example. Whether it's chopping down trees, showing his daughter how to drive or playing football with his son, he's never let the fact that he's blind slow him down.
Then there's Joyce Fisher, possibly the only mom in Pasadena to smoke a pipe. For her, divorce is like a second coming of age, a chance to be the teen she never was. Just ask her '80s-obsessed teenage daughter Katie, whose clothes she's always borrowing (that is, when Mom's not tagging along with Katie to the mall).
At the center of all this is Henry, the Fishers' 11-year-old son. Having always been his dad's eyes, ears and wingman, Henry's less than thrilled when Mel shows up with Elvis, a guide dog... which is also how Henry learns about the pending divorce. Awkward. While reluctant to the changes this "big ball of fur" would bring, it's through an Adult Henry's voice-over (Jason Bateman) that we ﬁnd out his parents' split would "allow all of us to ﬁnally discover... who we needed to be."

After years of cleverly hiding his blindness, with Elvis now at his side, Mel must reveal he is blind to his biggest client without losing his business. At the same time, when Henry borrows Mel's guide dog, he is mistaken for being blind, but then decides to keep up the misconception after winning the attention of a pretty girl. Meanwhile, when Joyce's 25-year-old grad school study partner validates Joyce as cool, Katie starts to see her mother in a new light.


Father and son, Mel and Henry, push each other to ask out women in their building, only to discover the women they're pursuing are mother and daughter. Meanwhile, Joyce, lost at sea on her first date since the separation, panics and crashes Katie's date at a carnival, resulting in an impromptu mother-daughter double date.

on 2/22/2014
Email ThisBlogThis!Share to TwitterShare to FacebookShare to Pinterest